'this' vs $scope in AngularJS controllers

"How does this and $scope work in AngularJS controllers?"

it is created on the controller object, not on $scope. Views cannot see the addPane function -- they only have access to functions defined on $scope. In other words, in the HTML, this won't work:

After the "tabs" controller constructor function executes, we have the following: 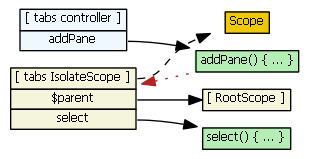 Well, the red dotted line is the answer. The addPane() function's "scope" (I'm referring to JavaScript's function scope/closures here) gives the function access to the tabs isolate $scope. I.e., addPane() has access to the "tabs IsolateScope" in the diagram above because of a closure that was created when addPane() was defined. (If we instead defined addPane() on the tabs $scope object, the pane directive would not have access to this function, and hence it would have no way to communicate with the tabs $scope.)

To answer the other part of your question: how does $scope work in controllers?:

Within functions defined on $scope, this is set to "the $scope in effect where/when the function was called". Suppose we have the following HTML:

And the ParentCtrl (Solely) has

Clicking the first link will show that this and $scope are the same, since " the scope in effect when the function was called " is the scope associated with the ParentCtrl.

Clicking the second link will reveal this and $scope are not the same, since " the scope in effect when the function was called " is the scope associated with the ChildCtrl. So here, this is set to ChildCtrl's $scope. Inside the method, $scope is still the ParentCtrl's $scope.

I try to not use this inside of a function defined on $scope, as it becomes confusing which $scope is being affected, especially considering that ng-repeat, ng-include, ng-switch, and directives can all create their own child scopes.