algorithm - What is a plain English explanation of "Big O" notation?

Quick note, this is almost certainly confusing Big O notation (which is an upper bound) with Theta notation "Θ" (which is a two-side bound). In my experience, this is actually typical of discussions in non-academic settings. Apologies for any confusion caused.

Big O complexity can be visualized with this graph: 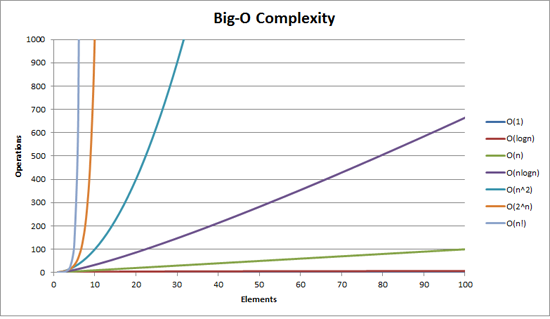 The simplest definition I can give for Big-O notation is this:

Big-O notation is a relative representation of the complexity of an algorithm.

There are some important and deliberately chosen words in that sentence:

Come back and reread the above when you've read the rest.

The best example of Big-O I can think of is doing arithmetic. Take two numbers (123456 and 789012). The basic arithmetic operations we learned in school were:

Each of these is an operation or a problem. A method of solving these is called an algorithm.

The addition is the simplest. You line the numbers up (to the right) and add the digits in a column writing the last number of that addition in the result. The 'tens' part of that number is carried over to the next column.

See the pattern? The complexity (being the number of operations) is directly proportional to the number of digits n in the larger number. We call this O(n) or linear complexity.

Subtraction is similar (except you may need to borrow instead of carry).

Multiplication is different. You line the numbers up, take the first digit in the bottom number and multiply it in turn against each digit in the top number and so on through each digit. So to multiply our two 6 digit numbers we must do 36 multiplications. We may need to do as many as 10 or 11 column adds to get the end result too.

As the algorithm scales with n- squared , this is O(n 2) or quadratic complexity. This is a good time to introduce another important concept:

We only care about the most significant portion of complexity.

The astute may have realized that we could express the number of operations as: n2 + 2n. But as you saw from our example with two numbers of a million digits apiece, the second term (2n) becomes insignificant (accounting for 0.0002% of the total operations by that stage).

The next best example I can think of is the telephone book, normally called the White Pages or similar but it varies from country to country. But I'm talking about the one that lists people by surname and then initials or first name, possibly address and then telephone numbers.

Now if you were instructing a computer to look up the phone number for "John Smith" in a telephone book that contains 1,000,000 names, what would you do? Ignoring the fact that you could guess how far in the S's started (let's assume you can't), what would you do?

This is called a binary search and is used every day in programming whether you realize it or not.

So if you want to find a name in a phone book of a million names you can actually find any name by doing this at most 20 times. In comparing search algorithms we decide that this comparison is our 'n'.

That is staggeringly good, isn't it?

It's worthwhile at this point to explain that Big O can be used to determine three cases with an algorithm:

Normally we don't care about the best case. We're interested in the expected and worst case. Sometimes one or the other of these will be more important.

Back to the telephone book.

What if you have a phone number and want to find a name? The police have a reverse phone book but such look-ups are denied to the general public. Or are they? Technically you can reverse look-up a number in an ordinary phone book. How?

You start at the first name and compare the number. If it's a match, great, if not, you move on to the next. You have to do it this way because the phone book is unordered (by phone number anyway).

So to find a name given the phone number (reverse lookup):

This is quite a famous problem in computer science and deserves a mention. In this problem, you have N towns. Each of those towns is linked to 1 or more other towns by a road of a certain distance. The Traveling Salesman problem is to find the shortest tour that visits every town.

If you have 3 towns A, B, and C with roads between all pairs then you could go:

Well, actually there's less than that because some of these are equivalent (A → B → C and C → B → A are equivalent, for example, because they use the same roads, just in reverse).

In actuality, there are 3 possibilities.

This is a function of a mathematical operation called a factorial. Basically:

So the Big-O of the Traveling Salesman problem is O(n!) or factorial or combinatorial complexity.

By the time you get to 200 towns there isn't enough time left in the universe to solve the problem with traditional computers.

Something to think about.

Another point I wanted to make a quick mention of is that any algorithm that has a complexity of O(n a) is said to have polynomial complexity or is solvable in polynomial time.

O(n), O(n2) etc. are all polynomial time. Some problems cannot be solved in polynomial time. Certain things are used in the world because of this. Public Key Cryptography is a prime example. It is computationally hard to find two prime factors of a very large number. If it wasn't, we couldn't use the public key systems we use.

Anyway, that's it for my (hopefully plain English) explanation of Big O (revised).